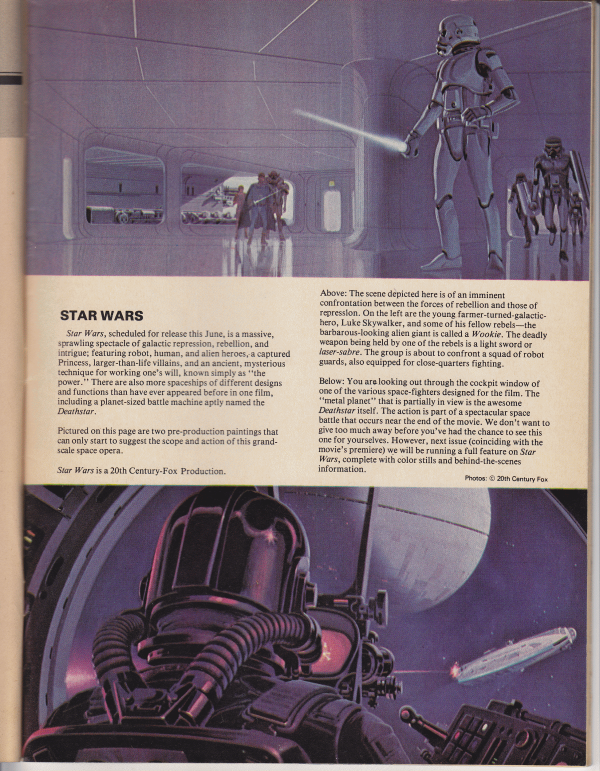 “STAR WARS
Star Wars, scheduled for release this June, is a massive, sprawling spectacle of galactic repression, rebellion, and intrigue; featuring robot, human, and alien heroes, a captured Princess, larger-than-life villains, and an ancient, mysterious technique for working one’s will, known simply as ‘the power.’ There are also more spaceships of different designs and functions than have ever appeared before in one ﬁlm, including a planet-sized battle machine aptly named the Deathstar.

Pictured on this page are two pre-production paintings that can only start to suggest the scope and action of this grand-scale space opera.
Star Wars is a 20th Century – Fox Production.

Above: The scene depicted here is of an imminent confrontation between the forces of rebellion and those of repression. On the left are the young farmer-turned-galactic-
hero, Luke Skywalker, and some of his fellow rebels — the barbarous-looking alien giant is called a Wookie. The deadly weapon being held by one of the rebels is a light sword or laser-sabre. The group is about to confront a squad of robot guards, also equipped for close-quarters ﬁghting.

Below: You are looking out through the cockpit window of one of the various space-fighters designed for the film. The “metal planet” that is partially in view is the awesome Deathstar itself. The action is part of a spectacular space battle that occurs near the end of the movie. We don’t want to give too much away before you’ve had the chance to see this one for yourselves. However, next issue (coinciding with the movie’s premiere) we will be running a full feature on Star Wars, complete with color stills and behind-the-scenes information.”