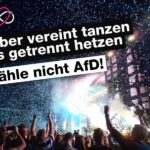 “The Anti-Flirt Club was an American club active in Washington, D.C., during the early 1920s. The purpose of the club was to protect young women and girls who received unwelcome attention from men in automobiles and on street corners. The Anti-Flirt Club launched an ‘Anti-Flirt’ week, which began on March 4, 1923.” Mehr Infos dazu … END_OF_DOCUMENT_TOKEN_TO_BE_REPLACED

[via Land Of The Unicorns]